Everything related to film activity has to do with filmmakers who I have come to know well through the Institute for Women Surfers — film is the canonical subcultural media in global surf history, so it’s no accident that the work of feminist activism in surfing often turns to film.  I have also worked a bit in radio and other media contexts, noted below. This award winning film is a must-see — making a lot of noise in women’s surfing and in the high stakes world of big wave surfing. Dayla Soul makes her way in the world, and in this film, by bringing people together, bringing communities of women together, and to do that sometimes you have to ruffle some feathers.  Like the other hard core women telling their stories here, Dayla is not afraid.  As a feature film and documentary about both Ocean Beach in San Francisco and about competitive big wave surfing, particularly the battle for women to surf the legendary Mavericks in Half Moon Bay, It Ain’t Pretty is a major work for a first time filmmaker.  Dayla Soul brings it!  She gives a lot, and credits all of those who make it possible to do her work as she goes along, Bianca Valenti a giant among them. 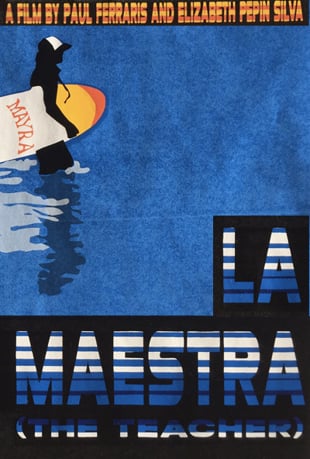 La Maestra is a great classroom film for prompting thoughtful discussions of globalization, gender, the body, and North/South cultural geographies. Presented in Spanish with English subtitles, with gorgeous production values and surf photography, the film restrains its political commentary so that its subject, the surfer/teacher Mayra Agulair from Baja, focuses the center stage. La Maestra is not a mouthpiece for any particular feminist, environment, or anti-globalization politics. Located across traditions of surf cinema, Third Cinema, and feminist documentary experiments with ways of looking and seeing, it opens audiences to a story about desire, modernity, aspiration, and liberation. In other words, it slows us down and makes us think.